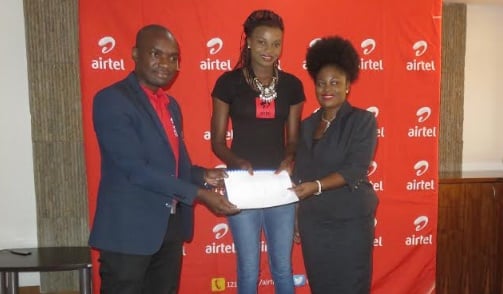 Mwayi signed the first contract with  mobile telecommunications firm in January this year expires on December 31, 2016 and both parties have agreed a new contract expected to run from January to December, 2017.

The official signing ceremony for the new contract took place Thursday (November 10, 2016) at Airtel head office in Lilongwe’s City Centre, where the netball icon pledged to represent the Airtel brand with full dedication and responsibility.

“It is a great honour for me to be appointed Airtel’s Brand Ambassador for ‘It’s Now Campaign’ for another year. I will always work and train hard to improve and remain on top of my game and above the competition.

“My promise to Airtel is that I will represent this amazing brand with full dedication and responsibility and assist in growing the brand to new levels,” said Mwayi.

Airtel Marketing Director Emmanuel Kasambara said the company decided to renew the contract after being impressed with Mwayi’s performance and achievements as well as her good personality.

“During the time Mwayi has served as Airtel’s Brand Ambassador, she has inspired the youth, especially with her monumental achievements, which include earning the title of International World Games Association athlete of the year and leading the Queens to victory over some of the world’s best netballing teams.

“We can all testify that here is a young lady whose passion and potential in the sport of netball has made her a global icon. Mwayi is a symbol of hope, motivation, inspiration and a reality check for us all- young and old. Through her, we realise that we all have what it takes to succeed and underscore our potential,” said Kasambara.