Manchester City recorded a famous win in Champion league against Barcelona on Tuesday night, and they could soon be doing battle off the pitch. 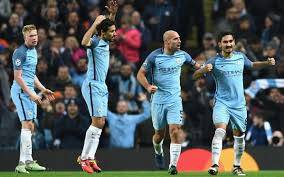 Ilkay Gundogan’s double, coupled with a Kevin De Bruyne free-kick, earned Pep Guardiola’s men an impressive 3-1 victory at the Etihad to avenge their drubbing at the hands of the Catalans a fortnight earlier.

However, the big guns could be facing off again, this time in the transfer market, as they look set to fight it out for Palmeiras defender Yerry Mina.

City have made a check on the Colombian, who still has three years remaining on his contract.

However, Barcelona are believed to have first option to sign Mina for £8.1million at the end of the season.